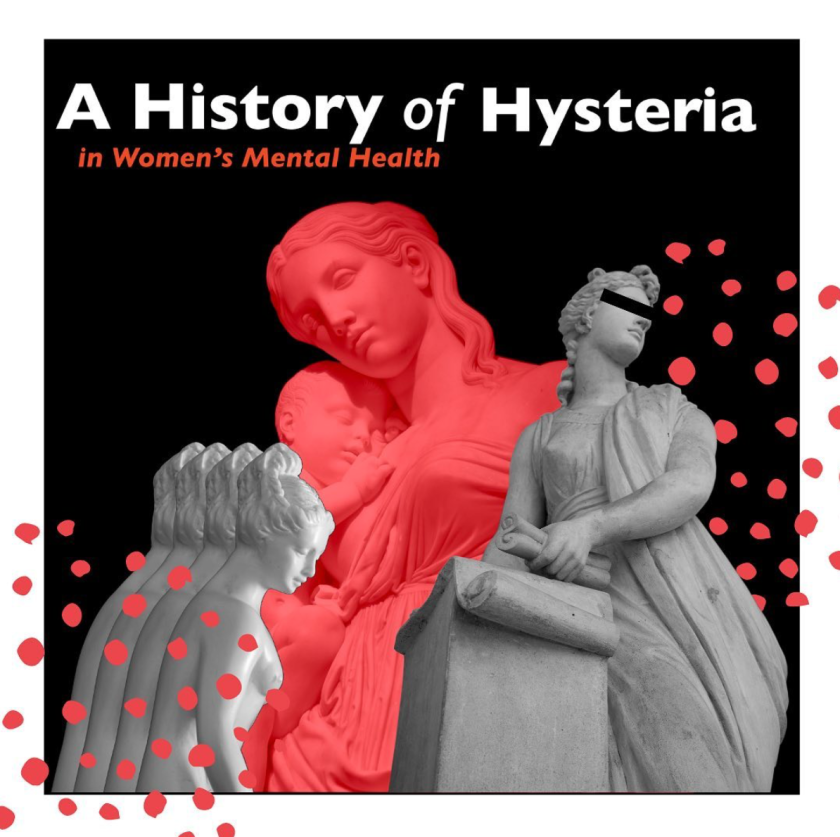 Imagine waking up one morning with flu-like symptoms; feeling ill, you head to the hospital where the doctors diagnose you with hysteria and send you to a mental health facility. Although horrific, this isn’t a made-up scenario. Unfortunately, for many women, this occurred frequently. It wasn’t until the end of the 20th century that doctors began diagnosing women’s mental health conditions correctly instead of branding them with craziness. Female hysteria was a common medical diagnosis for women who expressed a wide variety of symptoms including anxiety, fainting, depression, sexual desire, irritability, shortness of breath and loss of appetite for food or sex. This misdiagnosis cost many women their lives.

The history of hysteria begins in Ancient Egypt and Greece, where it was believed that a woman’s womb was capable of impacting the rest of her body. Many philosophers and physicians of this time believed that the uterus could migrate around the female body and place pressure on other organs, causing women to feel sick. According to Plato, this was known as the “wandering womb” theory. Others blamed hysteria on women’s menstrual cycles.

Throughout the 17th century, hysteria was thought to be a result of demonic possession. When a patient couldn’t be cured of a disease, it was believed that the symptoms of what we now know to be mental illness were those of someone possessed by the devil. In 1692, a small group of girls began exhibiting behavior such as fits and random spasms, claiming they were possessed by the devil. This is what sparked the famous Salem witch trials. It wasn’t until the 18th century that the correlation of demonic possession and hysteria was discarded.

In the 18th and 19th centuries, doctors believed the best cure to hysteria was marriage, and the concept of a “wandering womb” was largely rejected. Hysteria had moved from the uterus to the brain, which opened up the possibility of men becoming victims of it as well.

In the 19th century, mental institutions were becoming popular. When women didn’t meet the expectations of their husbands or society, they were admitted into these institutions as being melancholic, insane or a nymphomaniac. Physicians had terrible attitudes toward hysterical women, describing them as difficult, narcissistic, personally and morally repulsive and manipulative. A popular “cure” at the time for women was clitoridectomies, a form of genital mutilation in which the clitoris and ovaries are removed.

The Athens Lunatic Asylum opened in 1874 in Athens, Ohio. For the female patients hospitalized during the first three years of the asylum’s operation, the three leading causes of insanity were postpartum psychosis, change of life and menstrual derangements. Women with postpartum depression or hysteria were labeled insane and sent to recover in the institution. Women were often institutionalized for unnecessary or outright fallacious reasons. The institution was shut down in the early 1900s due to the decrease in the need for these facilities, following the shut down of the Athens Lunatic Asylum, most if not all mental asylums were shut down by 2000.

Associating feminism with hysteria became very popular in the 1980s. Feminists began to reclaim hysteria; they used it as a symbol of systematic oppression and reclaimed the term for themselves. This came from the belief that hysteria was a kind of pre-feminist rebellion against the oppressive social roles placed on women. Feminist writers wrote that pushing against the notion that socially constructed femininities and hysteria are natural to being a female. Feminist social historians, both men and women, argue that hysteria was caused by women’s oppressed social roles, rather than by their bodies.

The number of women diagnosed with female hysteria finally declined in the early 20th century due to doctors gaining a greater understanding of psychology. Neurologist Sigmund Freud claimed that hysteria was not anything physical, but it was an emotional, internal illness that not only affected women, but men as well. Now, female hysteria is no longer a recognized illness. Instead, different displays of hysteria are recognized in other conditions such as schizophrenia, borderline personality disorder and anxiety attacks.

In today’s society, mental health treatment for both women and men has tremendously improved compared to what earlier centuries faced. There is more awareness of mental health issues, and more efforts are being made to reduce the stigma and stereotypes associated with it. Mental health awareness still has a long way to improve, but activists and feminists continuously work to expose and change the negative attitudes that oppressed women for most of humanity’s history.