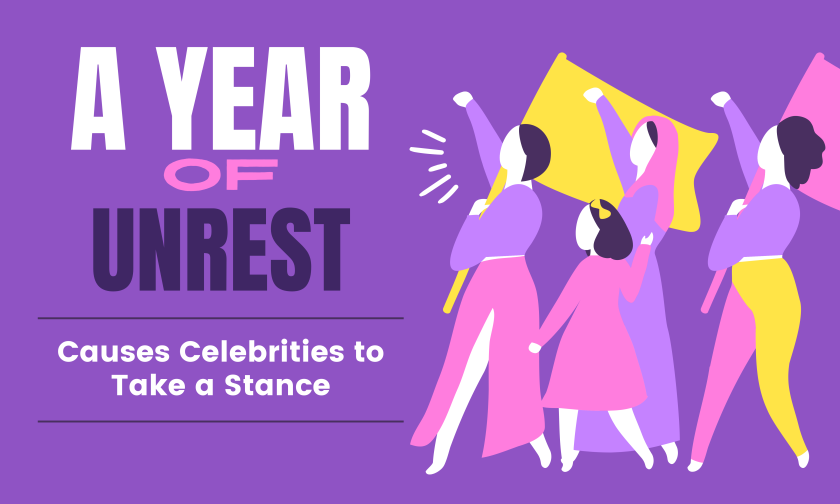 As the events of 2020 have unfolded, celebrities have continued to use their platforms to implement change in their followers’ minds. This year has been hit with monumental events that sparked conversations around the world. Many celebrities have chosen to speak out about these historic moments, encouraging their followers to stay informed and stay educated. The choice to go publicly political can be serious for some high-status influencers who risk losing some of their fanbases, receiving hate, and being surrounded by negativity. At the same time, celebrities recognize that there are more important things to convey to the world than just the content they are famous for producing.

In March of 2020, the Harvey Weinstein verdict emerged as a moment of triumph for the #MeToo movement. Harvey Weinstein and his brother co-founded the entertainment company Miramax and produced many successful films. Judge James Burke found Weinstein guilty of sexual assault in the first degree and rape in the third degree, which ignited discussion about women’s rights and sexual assault.

Two of the women that accused him of sexual misconduct were Ashley Judd, and Rosanna Arquette, both well known American actresses whose fame shone a spotlight on the #MeToo movement. Famous and everyday people who choose to speak up about sexual assault foster a safe environment for other women that have gone through similar experiences. Judd has been one of the most outspoken celebrities in the #MeToo movement. Since the beginning, she supported Christine Blasey Ford, a California professor who spoke out about being sexually assaulted, in the Brett Kavanaugh hearings. Seeing celebrities support others, even people that they don’t know, influences fans to make similar decisions and judgments.

This year, Australian bushfires spread across the country, catching attention from celebrity environmentalists, such as Leonardo DiCaprio. His numerous environmental projects draw attention to wildlife, climate change, and indigenous peoples.

Protecting the environment became increasingly relevant in the U.S. when California also saw a surge of wildfires that forced people inside their homes in addition to the COVID-19 pandemic. The pandemic, which has been very political and with no end in sight, caused many celebrities to speak out on public health issues and motivate people to take safety measures seriously. Dr. Tedros Ghebreyesus, the Director-General of the World Health Organization (WHO), shared a video of singer-songwriter Katy Perry on Twitter in which she sent a positive message to her Chinese fans, in which she says, “keep fighting and stay healthy and positive.” In the tweet, Dr. Ghebreyesus thanked Perry for using her voice to send a message of solidarity to the people of China.

Perry continuously uses her platforms to send positive messages to fans, such as performing at the 2020 Rock the Vote event, in which she prompted fans to head to the polls when the election arrived. Similarly, Billie Eilish uses her platform to talk about the large issues facing the country right now.

“We need leaders who will solve problems like climate change and COVID-19, not deny them. Leaders who will fight against systemic racism and inequality,” Eilish said at the Democratic National Convention.

After the killing of George Floyd by Minneapolis police officers, citizens all over America  protested for Black lives. The Black Lives Matter protests inspired many celebrity influencers to use their platforms to fight against and shine a harsh light on racism in the United States. Demi Lovato used her social media to pay tribute to Breonna Taylor, a young Black woman killed by police officers. She asked her fans to stand with her against racial injustice and get ready to vote. Grown-ish actress, Yara Shahidi, also used social media as a platform to voice her concerns about the state of the country while participating in protests herself and working with multiple organizations in Los Angeles to promote change.

The list of celebs is never-ending. Jane Fonda, one of the most politically active celebrities for climate change, was arrested three times for using her voice to fight for what she believes in. Michael B. Jordan added a diversity clause to all of his projects to increase diversity in Hollywood, and he participated in the Black Lives Matter protests that took place in 2020. John Legend and Chrissy Teigen, both as a couple and as individuals, make their voices loud. Chrissy Teigen is politically active on social media and prompts her fans to vote for change. Similarly, John Legend donates money to the DNC and the American Civil Liberties Union, and he is extremely vocal about his views on Twitter. At the 2020 DNC, he sang his new song called “Never Break,” then tweeted, “The song is about love, hope, and resilience, and I think we could all use some of that right now.”

Ultimately, celebrities are using their fame to inspire positive change. After the tragic events the world has witnessed in 2020, celebrity voices are bringing people together. Through social media, music, comedy and TV shows, celebrities have found outlets to impact fans beyond what they are famous for. Celebrity outreach creates a domino effect on people. Celebrities that choose to lead others are helping implement change for the better.